Rick Roberts started his music career in 1970, with the Flying Burrito Bros., a direct offshoot of the legendary Byrds. After the band parted company with Gram Parsons, Rick stepped in as rhythm guitarist, splitting the vocals with Chris Hillman, and composing both with Hillman and by himself. He recorded with the Burrito’s on their third and fourth albums before the original group broke up. Rick then recorded two critically acclaimed albums before forming the group Firefall in Colorado in 1974. Rick wrote and sang the hit songs “You Are The Woman”, “Just Remember I Love You”, “Livin’ Ain’t Livin'”, “Strange Way To Tell Me You Love Me”, “Headed For A Fall”, “Goodbye, I love You”, before leaving the band in 1981.

After taking some time off, Rick formed another band in southern California with Randy Meisner, original bass player and singer of The Eagles, called The Roberts-Meisner Band, and toured nationally during the late 1980s. Unfortunately there is no commercially recorded music of the band, but you can view some of their television performances on YouTube.

His earlier hits continue to receive strong radio airplay worldwide. “You Are The Woman” has just topped 5 million airplays, while “Just Remember” hit 3.5 million, and “Strange Way”, almost 2 million. For the past twenty years, Rick has been living a more relaxed lifestyle, enjoying his life and marriage. Rick is excited to be releasing new songs in 2010 after so many years and is taking advantage of the internet to make those songs widely available. 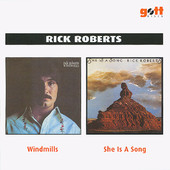 Windmills BUY at the Itunes Store

This is a compilation of both of Rick’s solo albums, recorded directly after the Flying Burrito Brothers disbanded. It was produced by well-known producer, David Anderle, and featured a star-studded cast of Rick’s friends and acquaintances. Even though it garnered strong reviews, it never managed to make much of an impact on the public.

Get the Album Artwork/Booklet by clicking here. 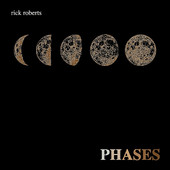 Phases BUY at the Itunes Store 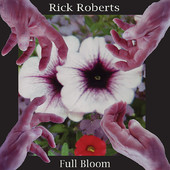 Artist Credits for Windmills\She Is A Song Albums

Rick moved back to Colorado to make this album, to make She Is a Song, his second solo effort. Chris Hillman produced and appeared on it, as well as some of his old pals from L.A. and some well-known local favorites like Joe Walsh. It too got very good reviews, but made even less of a dent on the charts. Happily, Rick still hears from radio DJs who tell him they play some of the songs from both LPs even now.

The credits for the musicians are not included for my solo albums, so I thought I’d add them here, as they were almost all my friends and were willing to help me along with my first efforts at going it alone. I will always be grateful for their excellent contributions. —Rick

She Is A Song
Produced by Chris Hillman

Partial List of Songs Composed by Rick Roberts
“Colorado”
“Four Days of Rain”
“Why Are You Crying”
“Old Songs”
“In My Own Small Way”
“Glad To Be Goin’”
“Lights “
“Two Lovely Women”
“Deliver Me”
“Davy McVie”
“Jenny’s Blues”
“Drunk and Dirty”
“The Captain”
“In a Dream”
“She Is a song”
“Sail Away”
“Mexico”
“Dolphin’s Lullaby”
“Livin’ Ain’t Livin’”
“You Are the Woman”
“Someday Soon”
“Just Remember I Love You”
“So Long”
“Only A Fool”
“Count Your Blessings”
“Sweet Ann”
“Strange Way”
“Goodbye, I Love You”
“Stardust”
“Love That Got Away”
“Headed For a Fall”
“Undertow”
“If You Only Knew”
“It Doesn’t Matter”
“Can’t You Hear Me Callin’”
“Even Steven”
“Laugh Or Cry”
“Before You Call It Love”
“I Still Love You”
“In Her Eyes”
“Indigo Blue”
“Baby’s Got a Secret”
“To Get Some Love”
“Lonely Women/Unhappy Ever After”
“Next Last Chance”
“I’ll Be Your Daddy”
“Hot Love (on a cold night)”
“Like An Angel”
“Try It Once For Fun”
“Just Like You”
“Learnin’ To Love”
“Claire”
“Keep On Walkin’”
“Good Things Never Last”